Zorori (ゾロリ, Zorori) is the protagonist in the Kaiketsu Zorori series. He is a yellow fox who wanders the world in order to fulfill his deceased mother Zororeene's last wish: become the ultimate Prankster Genius, marry with a beautiful woman and build a huge castle.

Zorori's main qualities are his incredible intelligence and cunning, that allow him to survive to the most perilous situations. He's also very skilled in building mechas and other machines.

However, Zorori's personality is somewhat complicated and ambiguous: normally he's a cheerful guy that loves singing and traveling around, but sometimes he behaves in a childish and very arrogant way (he refers to himself with 俺さま, Oresama, the rudest form to say "I", or naming himself with the honorific suffix さま Sama). Since his main goal and hobby is pulling pranks and having fun in the back of his "victims", he tries to show himself selfish (he never accepts a quest if he cannot benefit from it), mischievous and untrustworthy. In the most of cases, however, he reveals his real generous and kind nature, usually when he has to deal with family questions or by accident, ending up with helping his victim. Nevertheless, if he decides to make good deeds by himself, he behaves as he has fever. He had and has a strong bond of love with his mother, and that's the reason why the memory of her birthday causes him a terrible suffering (as we found out in I love Mommy).

Zorori is a fox with yellow fur and black eyes. Usually he wears clothes reminiscent of the Edo period: a sandogasa (straw hat), a blue shirt, a striped cape and a pair of green forest pants. In some crucial moments, he wears the legendary costume, very similar to Zorro's one: a black hat, a black eye mask, a black and red cape, blue tights with the letters ZZ painted on the chest, a golden belt that represents the shape of a fox's head and shiny red boots.

Zorori also makes use of frequent disguises, and in most of them he keeps wearing the eye mask.

As for each character in the series, very little is said about Zorori's background.

He lived a happy childhood alongside his mother Zororeene, even though his father, who was an airplane pilot with a strong passion for flying, left his family when he was a little kid. It is rumored that Zororeene died at Zorori's coming of age, and since that event Zorori began wandering the world to fulfill her last wish.

Zorori's first destination in his journey is Levanna Kingdom, where he meets Ishishi and Noshishi. After an unsuccessful plan to gain a castle and a bride (see The Dragon Slayer), ruined by the incompetence of the two boars, who Zorori convinced to take part to it, they propose him to be their teacher of the art of pranks. Firstly Zorori refuses the offer, but another adventure (the one narrated in The Great Duel at Zorori Castle!) contibutes to start a bound of friendship among the three. Hence, Zorori travels the world with Ishishi and Noshishi as his followers and apprentices, and they live a series of bizarre adventures.

Zorori's name comes from the spanish term Zorro, meaning "fox", but it is also a reference to the legendary hero Zorro, since the legendary costume is quite similar to his. 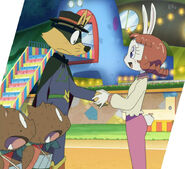 Add a photo to this gallery
Retrieved from "https://kzorori.fandom.com/wiki/Zorori?oldid=4275"
Community content is available under CC-BY-SA unless otherwise noted.